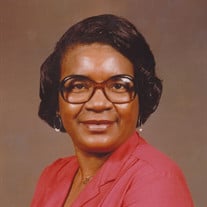 Clara V. Peoples was born April 4, 1931 to Mr. R.D. White and Naomi Brim in Halls, Tennessee. Clara was a young mother. She married her childhood sweetheart W.C. Peoples. To this union, one child was born, Hazel L. Harden, who preceded her mom in death August of 2020. Clara had a love for gardening, cooking, flowers, church and family. Since Clara was a young mother, we suspected that she completed the eighth grade and that was it. Clara had a love for family and the church. She could be found in the kitchen most of the time running things, making sure all had something to eat. She received Christ early in her life and made sure all of her grandchildren knew who He was also. Every Sunday she made sure were were all in church seated next to her. Clara worked at the Bed Factory in Chicago Heights. When she left there, she was employed by Ingalls Memorial Hospital. While employed there, she worked in housekeeping, X-Ray and transportation. She retired in October of 1994. Many times at work she wore a white lab jacket and her pockets were not empty. She had everything from chicken wings to French fries with ketchup in her pocket. Not once did she ever have a grease or ketchup stain anywhere on that white lab jacket. She sang in the church choir, helped in the kitchen, helped with fruit sales and Vacation Bible School. Psalm 92 was her favorite. Mother Peoples, as she became, could be heard reciting that Psalm all the time. On January 11, 2022 at the young age of 90, Mother Peoples received her wings. The Lord called her home to be with Him. That smile, love for life, family and church will be greatly missed by all of us. She leaves to cherish all of her memories, life lessons and wisdom her son in law Calvin F. Harden, Sr.; grandchildren Alfonso Moore Sr., Naomi A. Harden, Calvin F. Harden Jr. (Patricia); nine great grandchildren Alfonso Moore Jr., Donnelle Moore, Lakeya A. Moore, Alicia Marie Moore, Calvarae Hazel Harden, Joshua Calvin Harden, Marie Verduzco, Jose Verduzco, Angela Verduzco; eleven great great grandchildren Sariyah Moore, Sayveon Moore, Ahmir Moore, Aydan Moore, Addison Moore, Danielle Moore, Amari Moore, Janelle Moore, Kyla Moore and Karon Walker. Her husband W.C. Peoples, daughter Hazel Harden and grandson Richard L. Moore Jr. all preceded her in death.

Clara V. Peoples was born April 4, 1931 to Mr. R.D. White and Naomi Brim in Halls, Tennessee. Clara was a young mother. She married her childhood sweetheart W.C. Peoples. To this union, one child was born, Hazel L. Harden, who preceded her... View Obituary & Service Information

The family of Clara Virginia Peoples created this Life Tributes page to make it easy to share your memories.

Send flowers to the Peoples family.