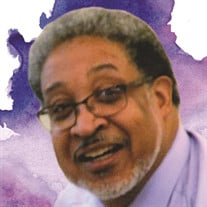 Kevin Allan Knazze, Sr. was born in Chicago, Illinois on June 13, 1959. He was the youngest of nine children born to the union of the late Herron Knazze and Lula Mae Knazze (nee Sweet). Kevin accepted Christ into his life at an early age and continued his strong spiritual relationship throughout his life as a member of Bellevue Baptist Church. He served with joy in the 11AM Choir, the Youth Church Ministry, and assisted with Vacation Bible School preparations for 10 years. He received his early education at St. Brendan School where he met his lifelong friends, Homer McCoy, Ulysses Terhune, and the late Brian Rogers. After graduating from Quigley Seminary South High School, he went on to earn an Associates in Liberal Arts degree from Malcolm X College, and he received a Bachelor of Arts in Business Administration from St. Xavier University. Kevin’s energetic, outgoing personality caused him to be a magnetic force, drawing others to him wherever he went. His charismatic spirit served him well throughout his life as he built a successful 33-year career with Minnesota Mining and Manufacturing (3M) where he mentored others and made life-long friends. Kevin took the time to get to know people in a way that made them feel special. He was a hardworking man who took pride in being able to provide for his family. He always showed a genuine interest in the well-being of others and never knew a stranger. People knew him wherever he went, regardless of how far he traveled from home. He was an avid Chicago sports fan, except for the Cubs. He also loved all genres of music and loved to dance and have a good time socializing with family and friends. On August 20, 1983, Kevin married the love of his life, Anita Verser. To this union was born, Kevin Allan Knazze, Jr., Kara Alyse Knazze, and Kayla Alaine Knazze. Kevin departed this life on Tuesday, December 8, 2020 when he was called home to his Heavenly Father. Although no longer here in body, Kevin’s impact on others and fun-loving spirit will endure forever in all the people he’s touched and inspired, especially the many nieces and nephews to whom he was a favorite uncle. Along with his parents, Kevin was preceded in death by his brother Howard Knazze and his sister Debra Perkins. Kevin’s memory will be cherished by his wife Anita, and their children Kevin Allan, Jr., Kara Alyse, and Kayla Alaine; his siblings – Harvey Knazze, Melvin Knazze (Madelyn), Hattie Knazze, Elizabeth Scott (Sean), Herron Knazze (Florence), Karen Knazze, and a host of well-loved nieces, nephews, other relatives, and friends. He will be forever missed but his positive and uplifting spirit, along with his infectious smile will last always.

Kevin Allan Knazze, Sr. was born in Chicago, Illinois on June 13, 1959. He was the youngest of nine children born to the union of the late Herron Knazze and Lula Mae Knazze (nee Sweet). Kevin accepted Christ into his life at an early age and... View Obituary & Service Information

The family of Kevin Allan Knazze Sr. created this Life Tributes page to make it easy to share your memories.

Send flowers to the Knazze family.