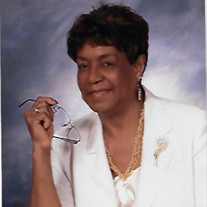 A beautiful smile. Tall and graceful. Well dressed. Loyal wife. Loving and devoted mother, aunt, and surrogate grandmother. Supportive sister. Kindhearted and God fearing. These are the words that describe the essence of who Lanetta N. Trent was. On August 1, 1934, LC Bailey, Sr., and Pinkie Patton Bailey welcomed their healthy baby girl, Lanetta Naomi, into their still growing family in Warren, Arkansas. She was the third of five daughters and eight sons born of this union. The family resided in a rural community where the parents were well respected, and the 13 children were well known. Lanetta was baptized and accepted Christ into her life at a young age, at Mount Olive AME Church in Warren. She graduated from Hermitage West Side High School in 1952. In the mid-50s, she moved to Chicago to start life as a young adult and to be closer to her older sister, Ann. Lanetta met her future husband, Henry Walker Trent in 1955, although the two did not begin dating until 1967. On December 21, 1968, they were united in holy matrimony. In 1979, they welcomed niece 5-year-old Shonda Nelson into their home as their loving daughter, following the death of Shonda’s mom (Mary), Lanetta’s youngest sister. Henry preceded them in death on July 30, 2007. Lanetta (also known as “Net,” to family and friends) enjoyed a long career as a Cook County Sherriff Correctional Officer before retiring. As a retiree, she enjoyed going on various travel excursions with her husband and friends and was an avid bowler in various leagues over the years. In later years she enjoyed the company of longtime family friend, Willie Glover, who escorted her to various social functions and with whom she enjoyed many good conversations. Until the onset of health challenges affected her movements, Lanetta was a faithful member of the hospitality ministry at New Covenant MB Church. On May 19, 2022, the Lord chose to call her home. There to welcome her was her husband and parents, brothers Sherman, Hulett, Albert, Delton, LC, Jr. and Jimmy Charles, and sisters Armenthia, Annie Bell, and Mary Sue, and her beloved grandson/nephew, David Alexander Kennedy. Those left to cherish memories of her include her beloved daughter, Shonda, devoted nieces Yolanda Nelson Turner, Zeniah Ward, Barbara Bouie-Scott, Zerlina Ward Kennedy, Tammie Bailey Wyatt, nephews Benson Perry III, John Dale Bailey, Chancey Bailey, grandson/nephew James Kennedy, surviving siblings, Lillie Perry, Glenn Bailey, brother-in-law Caesar Trent and a host of other dear nieces, nephews, cousins, and friends.

The family of Lanetta Naomi Bailey-Trent created this Life Tributes page to make it easy to share your memories.

Send flowers to the Bailey-Trent family.