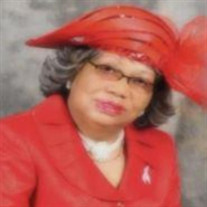 Lillie Mae Gee was born June 28, 1942, in Water Valley, MS. to Dora Bailey Lillie Mae graduated from Water Valley High School in Water Valley, MS. Lille Mae was married to Tommie Lee Gee until he departed in 1969. Lillie Mae surrendered her life to the Lord at an early age and was baptized at Smith Chapel Baptist Church in Coffeeville, MS. In 1970 she moved to Chicago from Mississippi with her Children, where her brother, Bobby G. Smith stepped in as a father figure to help raise her children. After moving to Chicago, she was a faithful member at Lilydale Progressive Missionary Baptist Church of Chicago, IL. She retired from Angelic Healthcare, August, 2004 and relocated to Olive Branch, MS, where she joined New Salem Baptist Church of Memphis, TN. She returned to Illinois in 2017, resided with her daughter Romelia, in Bartlett, IL and joined Second Baptist Church of Elgin where she was a faithful member. Lillie Mae was proceeded in life by her husband Tommie Gee, her mother, Dora Hubbard, her brother Bobby Gene Smith and her son Dewight Earl Bailey On January 13, 2022 the Lord suddenly called her home after suffering a fractured Pelvic bone and a brief stay at the Rehab Center. We were not ready to let her go, but God was ready to welcome her home. She leaves to Cherish her memory 2 daughters Romelia Davis (Larry), Sandra Bailey, 1 son Patrick Bailey (Adrian), Patrick Jr., whom she adopted and raised as her own, 9 grandchildren, Terence, Justin, Lamont, Wilnisha, Brittany, Patricia, LaShadrian, Adrian and Isaac, 26 great-grandchildren, 1 Aunt Cora Foxx, and a host of nieces, nephews, cousins, and friends.

The family of Lillie Mae Gee created this Life Tributes page to make it easy to share your memories.

Send flowers to the Gee family.